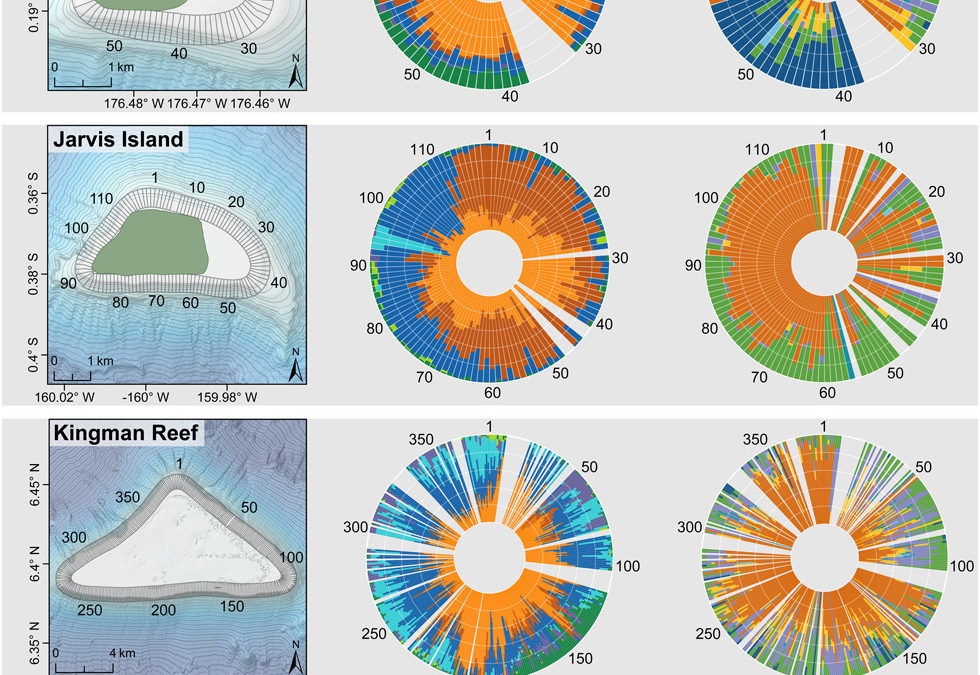 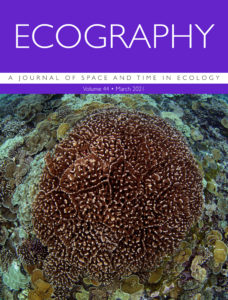 Helen’s paper made the cover of Ecography

The spatial structure of ecological communities on tropical coral reefs across seascapes and geographies have historically been poorly understood. Here we addressed this for the first time using spatially expansive and thematically resolved benthic community data collected around five uninhabited central Pacific oceanic islands, spanning 6° latitude and 17° longitude. Using towed-diver digital image surveys over ~140 linear km of shallow (8–20 m depth) tropical reef, we highlight the autocorrelated nature of coral reef seascapes. Benthic functional groups and hard coral morphologies displayed significant spatial clustering (positive autocorrelation) up to kilometre-scales around all islands, in some instances dominating entire sections of coastline. The scale and strength of these autocorrelation patterns showed differences across geographies, but patterns were more similar between islands in closer proximity and of a similar size. For example, crustose coralline algae (CCA) were clustered up to scales of 0.3 km at neighbouring Howland and Baker Islands and macroalgae were spatially clustered at scales up to ~3 km at both neighbouring Kingman Reef and Palmyra Atoll. Of all the functional groups, macroalgae had the highest levels of spatial clustering across geog- raphies at the finest resolution of our data (100 m). There were several cases where the upper scale at which benthic community members showed evidence of spatial cluster- ing correlated highly with the upper scales at which concurrent gradients in physical environmental drivers were spatially clustered. These correlations were stronger for surface wave energy than subsurface temperature (regardless of benthic group) and turf algae and CCA had the closest alignments in scale with wave energy across functional groups and geographies. Our findings suggest such physical drivers not only limit or promote the abundance of various benthic competitors on coral reefs, but also play a key role in governing their spatial scaling properties across seascapes.