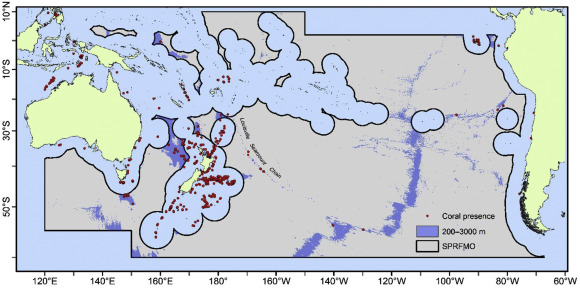 Field validation of habitat suitability models for vulnerable marine ecosystems in the South Pacific Ocean: Implications for the use of broad-scale models in fisheries management

Management of human activities which impact the seafloor in the deep ocean is becoming increasingly important as bottom trawling and exploration for minerals, oil, and gas continue to extend into regions where fragile ecosystems containing habitat-forming deep-sea corals and sponges may be found. Spatial management of these vulnerable marine ecosystems requires accurate knowledge of their distribution. Predictive habitat suitability modelling, using species presence data and a suite of environmental predictor variables, has emerged as a useful tool for inferring distributions outside of known areas. However, validation of model predictions is typically performed with non-independent data. In this study, we describe the results of habitat suitability models constructed for four deep-sea reef-forming coral species across a large region of the South Pacific Ocean using MaxEnt and Boosted Regression Tree modelling approaches. In order to validate model predictions we conducted a photographic survey on a set of seamounts in an un-sampled area east of New Zealand. The likelihood of habitat suitable for reef-forming corals on these seamounts was predicted to be variable, but very high in some regions, particularly where levels of aragonite saturation, dissolved oxygen, and particulate organic carbon were optimal. However, the observed frequency of coral occurrence in analyses of survey photographic data was much lower than expected, and patterns of observed versus predicted coral distribution were not highly correlated. The poor performance of these broad-scale models is attributed to lack of recorded species absences to inform the models, low precision of global bathymetry models, and lack of data on the geomorphology and substrate of the seamounts at scales appropriate to the modelled taxa. This demonstrates the need to use caution when interpreting and applying broad-scale, presence-only model results for fisheries management and conservation planning in data poor areas of the deep sea. Future improvements in the predictive performance of broad-scale models will rely on the continued advancement in modelling of environmental predictor variables, refinements in modelling approaches to deal with missing or biased inputs, and incorporation of true absence data.