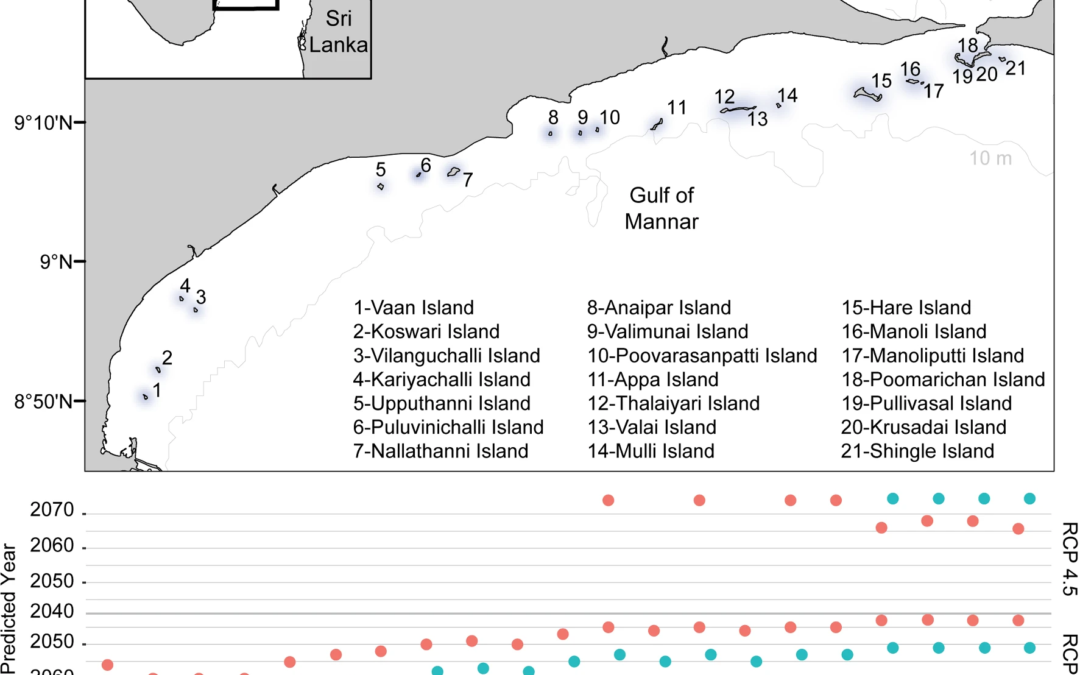 We used a 12-yr data set of benthic cover (2005–2017), spanning two bleaching events, to assess changes in benthic cover and coral community composition along 21 islands within Gulf of Mannar (GoM), southeast India. Overall, between 2005 and 2017 reefs had a simultaneous decrease in relative coral cover (avg. =  − 36%) and increase in algal cover (avg. =  + 45%). Changes in benthic cover were not consistent among islands, ranging from − 34 to + 5% for coral cover and from − 0.3 to + 50% for algae. There was a spatial gradient in coral mortality, which increased among islands from west to east. However, there was a disconnect between coral loss and subsequent increases in algae. Algal cover increased more on islands in west GoM where coral loss was minimal. Environmental co-factors (coral cover, percent bleaching, degree heating weeks, fish densities, Chl-a, pollution) explained > 50% of the benthic cover responses to successive bleaching. Coral survival was favored on islands with higher fish densities and chlorophyll-a levels, and increases in algal cover were associated with higher measures of pollution from terrestrial runoff. Coral morphotypes differed in their response following successive bleaching resulting in changes in the relative abundance of different coral morphotypes. Existing climate projections (RCP8.5) indicate a 22-yr gap in the onset of annual severe bleaching (ASB) for reefs in the east versus west GoM, and ASB was ameliorated for all reefs under the RCP4.5 projections. There is limited knowledge of the resilience of GoM reefs, and this study identifies coral morphotypes and reefs that are most likely to recover or decline from successive bleaching, in the context of forecasts of the frequency of future bleaching events in GoM.