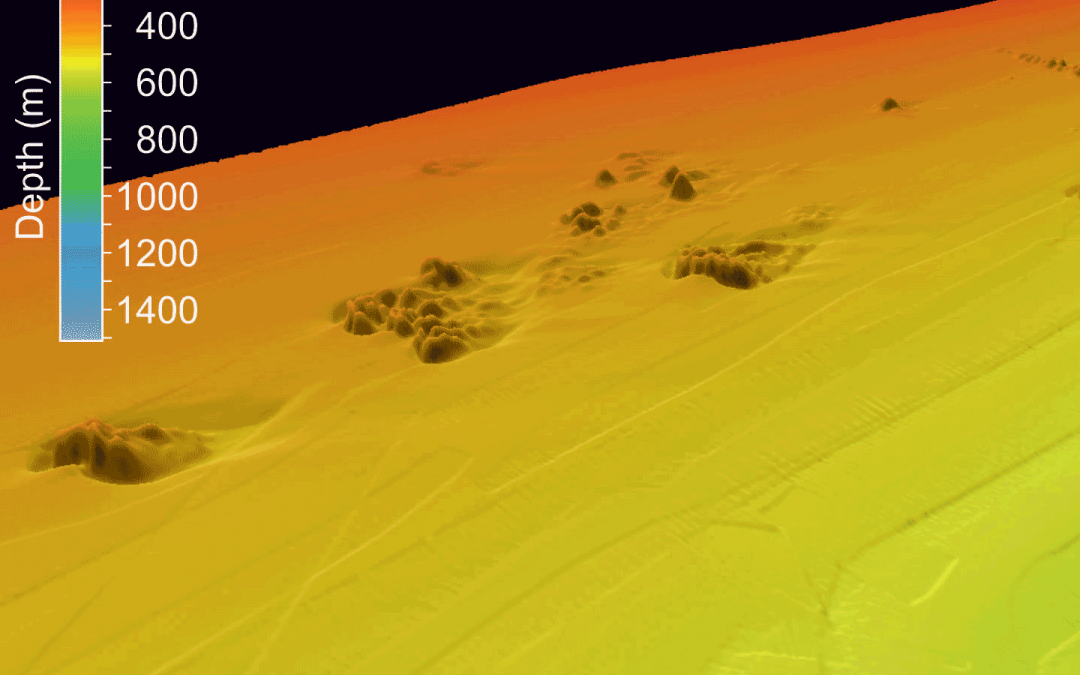 The Cape Lookout cold-water coral area off the coast of North Carolina forms the shallowest and northernmost cold-water coral mound area on the Blake Plateau in the NW Atlantic. Cold-water coral habitats near Cape Lookout are occasionally bathed in the Gulf Stream, which is characterised by oligotrophic warm water and strong surface currents. Here, we present the first insights into the mound distribution and morphology, sedimentary environment and coral cover and near-bed environmental conditions as recorded by bottom landers from this coral area. The mounds occur between 320 and 550 m water depth and are characterised by high acoustic backscatter indicating the presence of hard structure. Three distinct mound morphologies were observed: (1) a mound with a flattened top at 320 m, (2) multi-summited mounds with a teardrop shape in the middle part of the area and (3) a single mound at 540 m water depth. Echosounder profiles show the presence of a strong reflector underneath all mound structures that forms the base of the mounds. This reflector cropped out at the downstream side of the single mound and consists of carbonate slabs. Video analysis revealed that all mounds are covered by Lophelia pertusa and that living colonies only occur close to the summits of the SSW side of the mounds, which is the side that faces the strongest currents. Off-mound areas were characterised by low backscatter and sediment ripples, indicating the presence of relatively strong bottom currents. Two bottom landers were deployed amidst the coral mounds between December 2009 and May 2010. Both landers recorded prominent events, characterised by large fluctuations in environmental conditions near the seabed as well as in the overlying water column. The period between December and April was characterised by several events of increasing temperature and salinity, coinciding with increased flow and near-bed acoustic backscatter. During these events temperature fluctuated by up to 9 °C within a day, which is the largest temperature variability as measured so far in a cold-water coral habitat. Warm events, related to Gulf Stream meanders, had the duration of roughly 1 week and the current during these events was directed to the NNE. The consequences of such events must be significant given the strong effects of temperature on the metabolism of cold-water corals. Furthermore, elevated acoustic backscatter values and high mass fluxes were also recorded during these events, indicating a second stressor that may affect the corals. The abrasive nature of sand in combination with strong currents might sand blast the corals. We conclude that cold-water corals near Cape Lookout live under extreme conditions that limit mound growth at present.