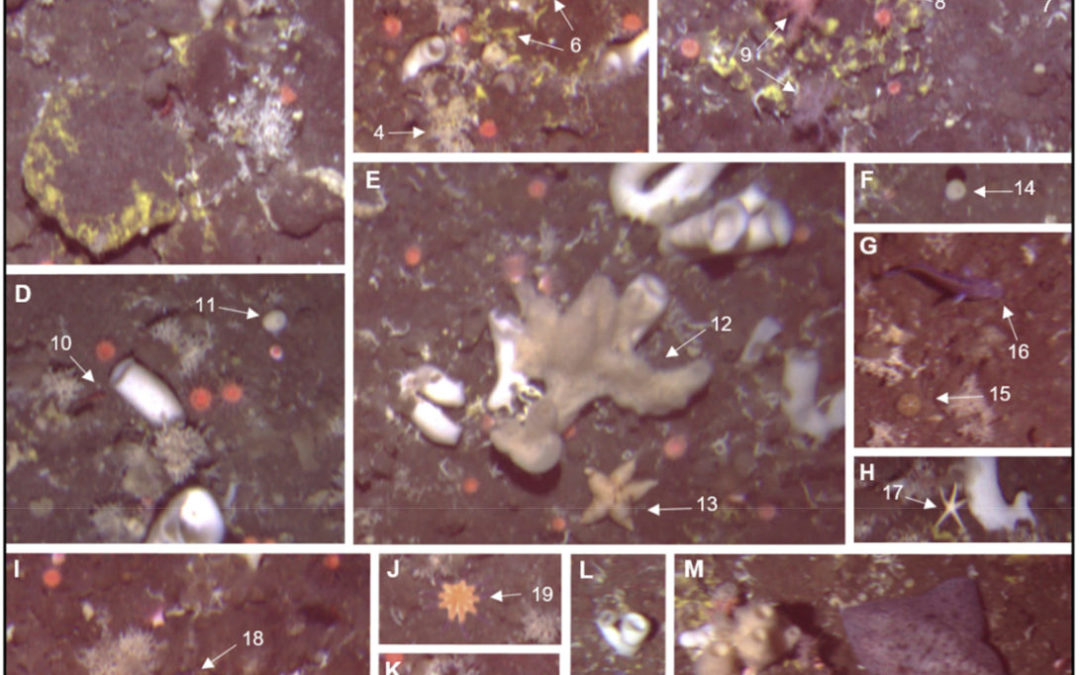 Deep-sea sponge grounds are important habitats that provide several ecosystem services, yet relatively little is known about their distribution and ecology. While most surveys have focused on the broad-scale distribution patterns of sponge grounds (100s – 1000s m), only rarely have the finer-scale (<10 m) spatial distribution patterns of the primary organisms been studied. In this study, the autonomous underwater vehicle (AUV) Hugin 1000 was used to map an area of an arctic sponge ground located on the summit of the Schulz Bank (Arctic Mid-Ocean Ridge), with the aim of detecting small-scale spatial patterns produced by the dominant megafauna. Using low-light cameras to construct a photomosaic comprising of 9,953 images and a virtual quadrat spatial sampling approach, density hotspots of the most prominent megafauna were visualized. The primary megafauna detected were demosponges, hexactinellids, ascidians, cnidarians, echinoderms, and demersal fish species. Most megafauna, like the primary structure-forming sponge species Geodia parva and Stelletta rhaphidiophora, were distributed evenly throughout the sample area, though species like Lissodendoryx (Lissodendoryx) complicata and Gersemia rubiformis displayed clear fine-scale spatial preferences. The three demersal fish species, Macrourus berglax, Reinhardtius hippoglossoides, and Amblyraja hyperborea, were uniformly distributed throughout the sample area. Based on the presence of skate egg cases and juveniles within many images, it is likely that the site is being used as a nursery ground for A. hyperborea. This study demonstrates the potential of using AUVs to detect fine-scale spatial patterns of the structure-forming sponges and demersal fish species. The use of AUVs for deep-water benthic surveys can help visualize how fauna (e.g. fish) utilise deep-sea habitats, and act as a tool for quantifying individuals through relatively unbiased means (e.g. pre-programmed track, no sampling). Such information is crucial for future conservation and management efforts.