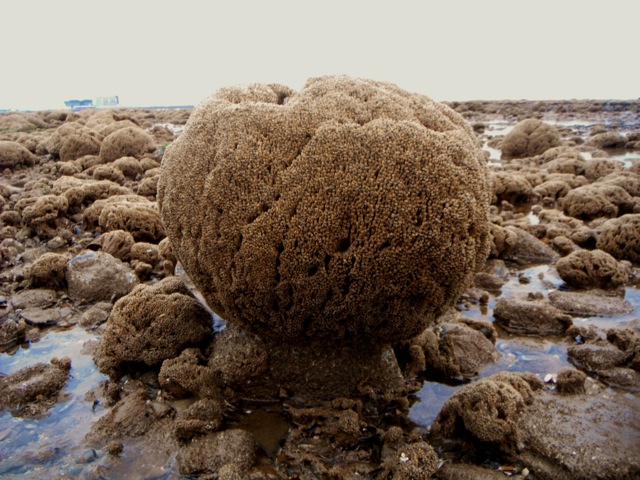 Biogenic reefs are important for habitat provision and coastal protection. Long-term datasets on the distribution and abundance of Sabellaria alveolata (L.) are available from Britain. The aim of this study was to combine historical records and contemporary data to (1) describe spatiotemporal variation in winter temperatures, (2) document short-term and long-term changes in the distribution and abundance of S. alveolata and discuss these changes in relation to extreme weather events and recent warming, and (3) assess the potential for artificial coastal defense structures to function as habitat for S. alveolata. A semi-quantitative abundance scale (ACFOR) was used to compare broadscale, long-term and interannual abundance of S. alveolata near its range edge in NW Britain. S. alveolata disappeared from the North Wales and Wirral coastlines where it had been abundant prior to the cold winter of 1962/1963. Population declines were also observed following the recent cold winters of 2009/2010 and 2010/2011. Extensive surveys in 2004 and 2012 revealed that S. alveolata had recolonized locations from which it had previously disappeared. Furthermore, it had increased in abundance at many locations, possibly in response to recent warming. S. alveolata was recorded on the majority of artificial coastal defense structures surveyed, suggesting that the proliferation of artificial coastal defense structures along this stretch of coastline may have enabled S. alveolata to spread across stretches of unsuitable natural habitat. Long-term and broadscale contextual monitoring is essential for monitoring responses of organisms to climate change. Historical data and gray literature can be invaluable sources of information. Our results support the theory that Lusitanian species are responding positively to climate warming but also that short-term extreme weather events can have potentially devastating widespread and lasting effects on organisms. Furthermore, the proliferation of coastal defense structures has implications for phylogeography, population genetics, and connectivity of coastal populations.