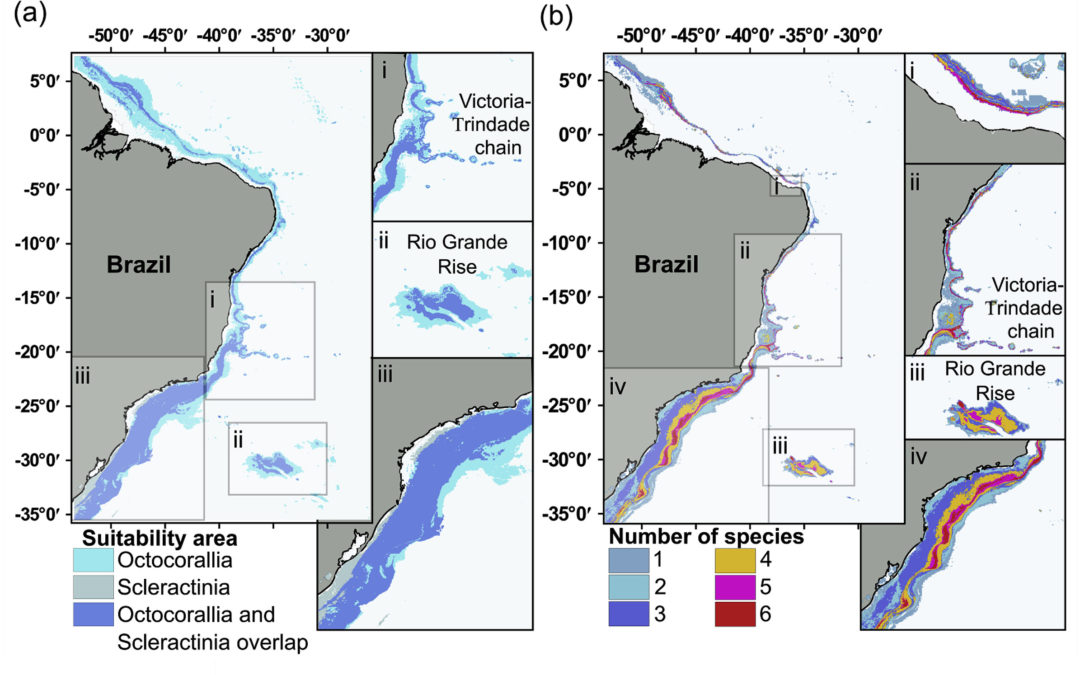 In face of increasing anthropogenic disturbance in the deep sea, it is a priority to better understand the regional distribution of cold-water corals (CWC). These organisms create some of the most species-rich habitats in the deep sea and, for this reason, they must be properly protected and managed. In this study, we aimed to identify suitable habitat for multiple CWC taxa off the Brazilian continental margin and compare their environmental niches. Habitat suitability models were developed using the Maxent approach, which allowed for the prediction of species distribution and for the identification of potential ‘hot spot’ areas that may be important for biodiversity conservation. Ecological niches were determined by a PCA-env approach, and niche similarity and equivalence were evaluated based on niche overlap using the Schoener’s D metric. Potentially suitable habitat for Octocorallia covered a broad latitudinal range encompassing nearly the entire Brazilian continental margin, whereas Scleractinia had greater potentially suitable habitat in the Central and Southern areas. Scleractinian species were observed to slightly differ in their environmental niche, with non-reef-forming species being more tolerant to a wider range of environmental conditions in comparison with reef-forming species, inhabiting a wider area of the South American continental margin. Due to the high potential suitability for several CWC species, the Central and Southern parts of the Brazilian continental margin should be considered as potential areas high CWC diversity. Considering the current state of the art and strategic assessment tools, these areas are important targets for conservation, management, and environmental impact assessment. Most reef-forming species had similar but not directly equivalent ecological niches, indicating that mapping efforts and management planning should consider CWCs at the species level.